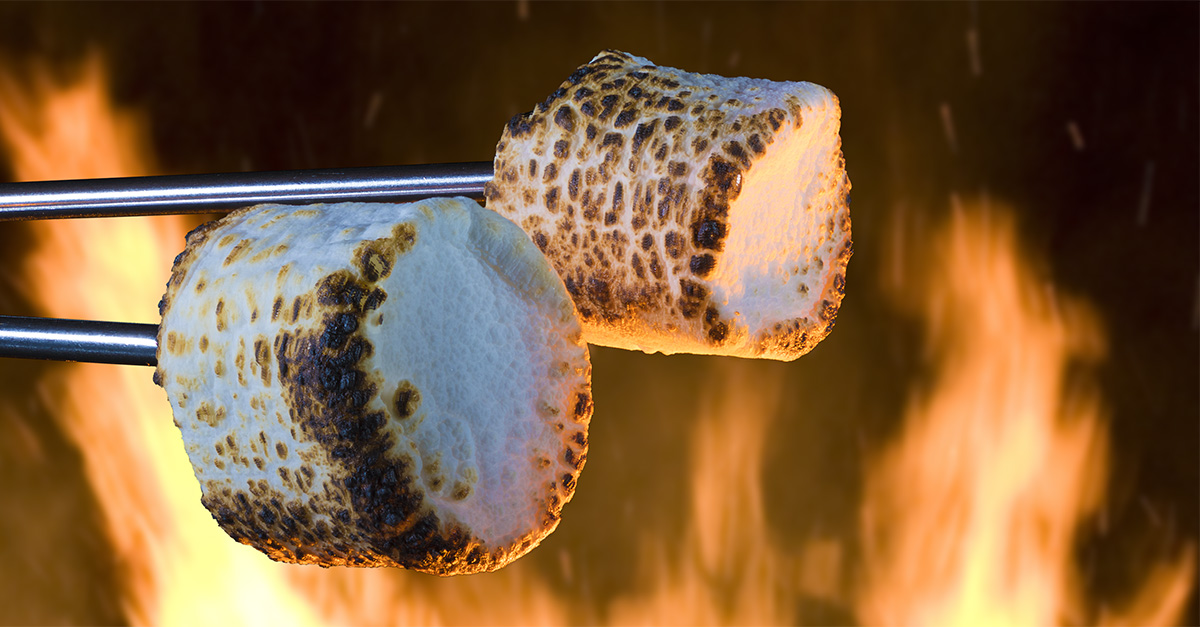 Everyone loves the sight and smell of marshmallows roasting over a campfire. Unfortunately, capturing one that conveyed the experience proved elusive for my children’s Christmas book under my self-imposed November deadline last year.

Thankfully, Amazon.com lets you update/change your book, even The Year Santa Came Back in paperback. So I’m hard at work trying to improve that image and others, hoping they’ll get youngsters even more excited about the outdoors. One of the roasted marshmallow outtakes is above.

The underlying problem isn’t the image, as much as crafting something that conveys the experience. Hopefully, I’m coming close, although I’d love comments and feedback—good or bad.

The campfire treat is well lit as it cooks over the flames, in real life. But, pull it close and it’s in the dark, backlit by the campfire. Our eyes see the scene that way, but our brain adjusts exposure. Cameras aren’t that smart. Exposing properly for the fire turns the smore ingredient black. Expose for the roasted marshmallow and the fire goes white. Neither option is as savory as the way we remember firesides with friends and family. Leave the thing close to the fire and it’s flambeau in seconds.

My first attempted remedy was the strobist approach. Set up on a tripod, adjust exposure for the flames, then remotely trigger flashes to properly light the roasted marshmallows.

Didn’t work. Yes, the Pocket Wizards worked perfectly and so did the Canon flashes.

The flames were more unpredictable than lottery numbers. With every breeze I was chasing embers around the property. The slapstick routine will go viral on YouTube if my neighbors videotaped. Then there’s the heat—not exactly great on gear—and when the wind died mirage blurred anything close to the embers.

The images were workable, but failed in reflecting the experience outdoorsmen relish. I regrouped and resigned myself to using the same layering technique I used on the front cover. It’s not my favorite avenue and drains time like a black hole, but effective when done right.

I took multiple images of the campfire and found two I liked. The winner would provide the background.

I then ran them through a blur filter (Gaussian) in Photoshop to ensure the flames were obvious, but didn’t overwhelm the main subject. My hope is this particular page reminds youngsters of that sweet treat fresh from the fire, but still communicates the campfire’s ambiance.

In my studio—I’m being liberal in that term, by the way—I took macro shots of the marshmallows using my Canon 100 mm f 2.8 lens. To provide the subtle hint of marshmallows near a fire a flash was underneath (slightly to the back) with an orange gel to provide that ring of color along the right side and bottom. Bare flashes to the left and right, slightly forward, completed the lighting setup. I used a black background and exposed for 1/200 of a second.

Depth of field was the next hurdle. That close to the gooey sweetness made only part of the treat in focus. That’s certainly not how I remembered it when I was young.

So I took 13 different photos, and focus stacked using Helicon Focus. As a result, the marshmallows and skewer are in focus—a much better reflection of what a youngster sees, even around a campfire.

I can’t recommend that software enough, either. The Photoshop version works, but not nearly as fast and as accurately as Helicon’s version. It’s not infallible, but it does some close.

The scary part is the time it’ll take me to select the finalist from the dozen or so good versions I’ve created. Pick up the updated book if you want to see how it turns out.

So that single image you see here is really 14 different photos gently massaged into one. The first was taken outside near an unruly campfire, with the subsequent 13 captured inside, using three flashes, four Pocket Wizards, tripod, camera, lens and nearly four rolls of duct tape. OK, maybe it was only 1 1/2 of the latter, but is it really worth it?

If that page reminds one youngster how fun it is to be outside with family and friends, the answer’s a resounding yes. If another asks his parents to roast a marshmallow and helps/watches/learns with the task, it’s a small victory—and they all add up.

My ultimate hope is that my children’s Christmas book reminds youngsters there’s a big and wonderful world just waiting for them outdoors, if they’re willing to put down their gaming stations and electronics long enough to discover it with someone they love. The story also delivers the message that there’s good reasons to obey the rules set by adults and miracles can and do happen, when good people get involved.

One thought on “Roasted marshmallows for my children’s Christmas book”