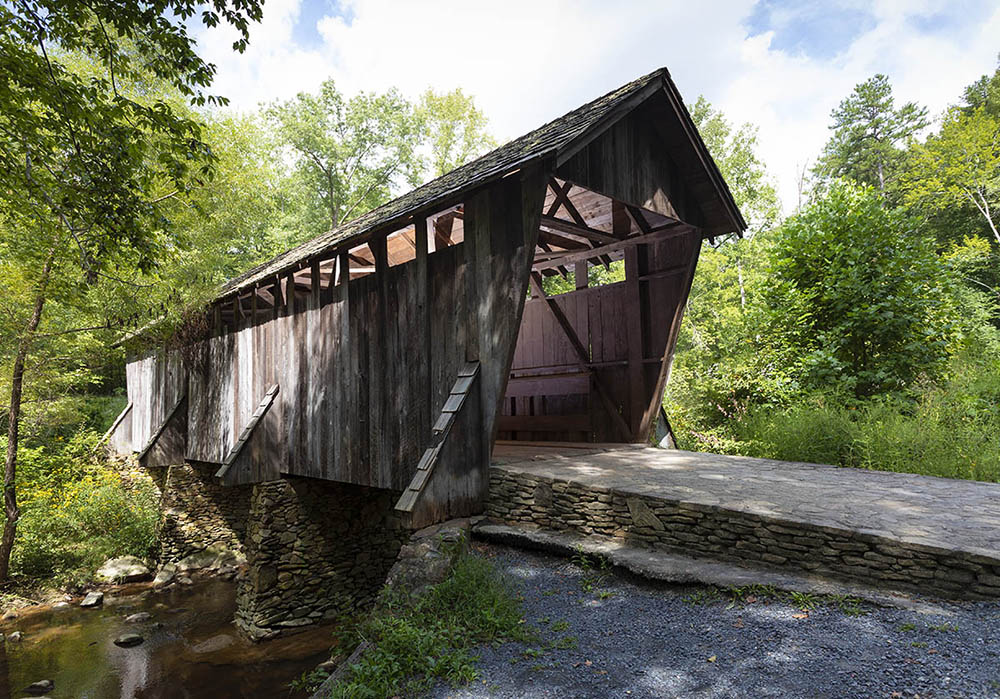 Is Pisgah covered bridge haunted? A few claim to have seen a woman hanging from the rafters of the span, although exactly why her spirit haunts one of the two remaining historic covered bridges in North Carolina is apparently lost to history.

The one-lane structure was built in 1911 for the tidy sum of $40. It was added to the National Register of Historic Places in 1972, but a 2003 flood swept the 54-foot bridge away. A year later is was rebuilt using 90 percent of the original materials, which were recovered downstream. Sometime in the 1930s the roof was replaced with tin, although today it more accurately reflects the original topping with wood shingles.

The bridge is south of Asheboro, NC, on the Uwharrie National Forest. Take I-73 south, then turn west on Pisgah Covered Bridge Road and watch for signs.

Markers are few and far between, though, and that last gravel turnoff is unexpected when you're traveling with any speed. I got lost, multiple times and I'm certainly not the only one.

There's a YouTube mention and comment about non-existent wind chimes heard during a visit. Most of the mentions are short a single sentence. 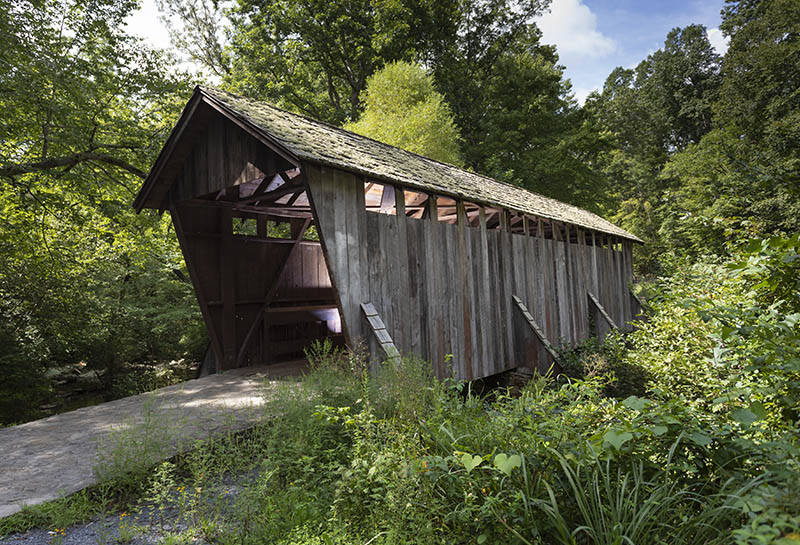 Last year, only a week before Halloween, a 19-year-old girl's body was found near Pisgah Covered Bridge Road. An autopsy determined cause of death was coincidentally "asphyxiation due to neck compression," according to news reports, which I won't link to out of respect for the family. The body of her mother's boyfriend was found earlier the same day. He died from a self-inflicted gunshot wound.

During my visit last summer I didn't discover apparitions, unexplained lights or clouds in my photos. I'll be the first to admit I trashed most of the images, however, because the modern highway next to the bridge makes an ugly composition. Maybe I should have looked closer.

The "spooky" interior light you see is created by a flash I tossed inside, triggered remotely from my Canon 5d MkIV. The approach was similar to my tent effort, strobist style.

I had the power cranked all the way up on the flash (a veteran 580 EXII), if you're wondering. Lens was Canon's EF 17-40 mm F4L, set at f5, with a 1/320 second exposure. I was forced to use that wide aperture to maximize interior strobe light, and went to high-speed sync to tame a bright sky.

The photographs don't do justice to the location or prove any Pisgah covered bridge haunted claims. I plan on heading back in a few weeks with a Ouija board as autumn color returns.

If you're in the area, you might do the same—unless, of course, you're afraid of ghosts.

If you're interested in purchasing one of my Pisgah covered bridge images, you can find it here.