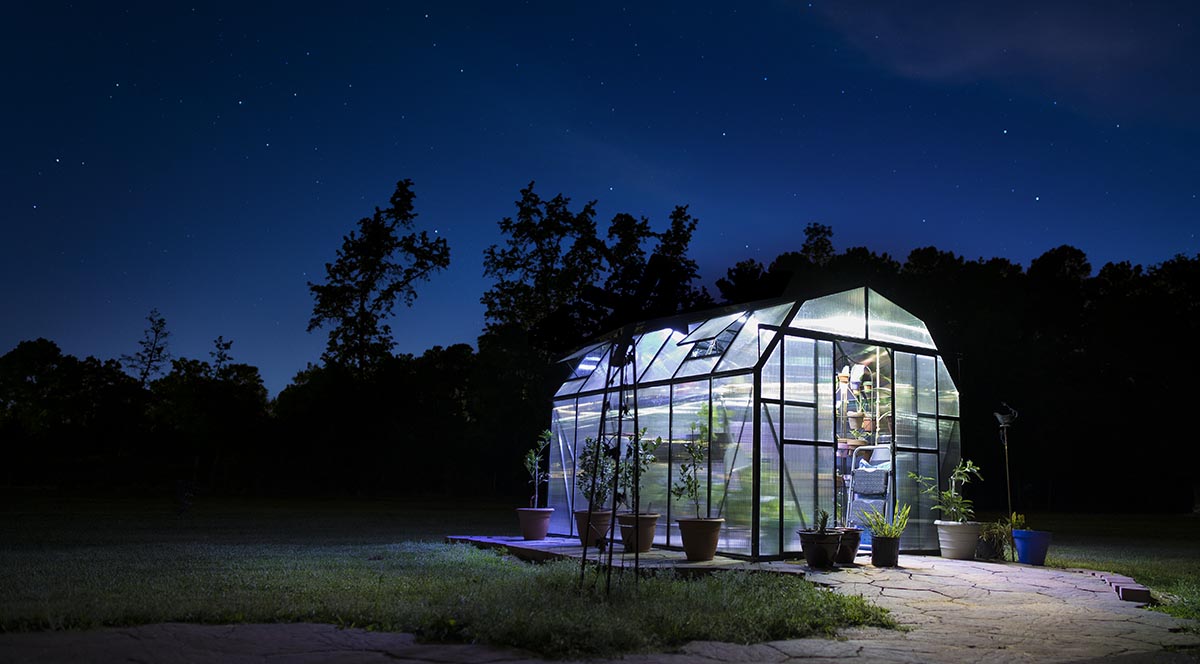 Capturing our Grandio greenhouse at night with stars in a fashion that showcases the evening sky, yet somehow communicates a well-lit and inviting structure is tougher than I thought. I went Strobist, but in this case, harnessed the power of Photoshop layers.

I’m confident you’ll agree my past attempt at getting an evening shot fell short. I’m content with the one above, although I’d love to hear your opinion. Here’s how you can give it a try.

My wife loves her Grandio greenhouse. But if you bring one home and are eager to share it with distant friends and family with a photo, it’s not easy. The daytime look is, well, not nearly as exciting as growing your own food in one. Getting the right lighting at night, on the other hand, is and always will be a juggling act.

In my case, the situation is worsened by a solar lighting system I designed and installed. It goes on automatically at dusk and it’s bright.

If you expose the photo long enough to pull out the stars, the greenhouse burns into a white blob. It’s bright enough to invade the silhouetted treeline.

Expose properly for the greenhouse and stars are few and far between. Then there’s all that light pollution from nearby Fayetteville, NC, that turns the sky ugly yellow. LED lighting in the greenhouse stays a cool white. Good luck balancing those in the same image, even with Photoshop.

I mentioned Strobist, but don’t let the approach intimidate you. It’s just a term for using any light that’s not mounted on your camera and will work great in this case. Add liberal amounts of patience, though.

Turn on and toss a light source inside your greenhouse, and you’re going Strobist. Think flashlights, camping lanterns and battery-powered TV. I’m kidding there on the latter, but don’t be shy about trying high output lights, even that spotlight. Hide them behind fast-growing tomatoes so they won’t be seen, rush outside with the mosquitos and take a photo. Too dark? Add junior’s headlamp, all of them. Dial up the camera’s ISO for good measure.

You may still have an ugly, polluted yellow skyline. In that case, turn your camera’s color correction from “auto” or “flash” to “tungsten.” That’s mostly what you’re seeing on the skyline anyway, warm tungsten lights polluting your view.

If you have old non-LED light sources in the greenhouse, they probably emit that same yellow tone. Balances things up nicely, huh? Now the camera correction handles all the heavy lifting.

I can’t guarantee it’ll turn, but put the camera on a solid surface, hit the shutter, expose for a long time, and let me know how it works. I paint a lot of my time exposures with a handheld flashlight. It works and works well.

In my case things got a little more complicated. I decided it was going to take two photos—one pleasing image of the stars, another of the greenhouse that’s correct, layered in Photoshop. Color in the images can be adjusted independently, which addresses that ugly light pollution.

The star layer is an 8 second exposure, F2, ISO 800 on my Canon 5d MkIV. It was held solidly on a tripod and the shutter timer was used to minimize movement. I focused on the treeline.

The greenhouse was different. I adjusted focus to it, attached Pocketwizards to a pair of Brilla BB-110C strobes and hid them inside. I went with the backside of the green beans that’re taking over, although I have to admit the spinach that’s been feeding us salads through late winter was a viable option.

The camera was unmoved on the tripod, to prevent me from trying to synchronize the images. The stars are moving anyway, so auto-align in Photoshop is a gamble, at best.

The strobes were dialed up to full power and triggered from a third Pocketwizard on my camera. Exposure time was 4 seconds, f2 on my Rokinon 24 mm lens, and ISO was dialed back to 400 to minimize noise in the greenhouse.

Then to create the Grandio greenhouse at night with stars look you see both photos were opened, with one tossed on top of other. Then I selected lighten in layering style options. Because the strobes didn’t go off in the longer, star exposure, the look I want floated to the surface.

Obviously, there was some masking touch up required. Nothing ever turns out like you planned or is easy when it comes to an image like this one.

I think it turned out pretty good, although I’d love your opinion. Am I done trying to capture a good Grandio greenhouse at night with stars or can I finally move onto something else?